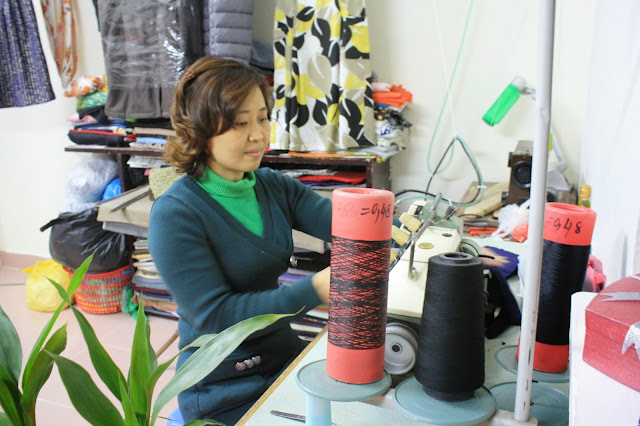 Meet Lan Anh – our tailor of the Peekaboo Dress and the Navy and the Snow-White Chemise. She has been tailoring clothes for more than 30 years, when her mother taught her to sew at the age of 15. After she finished school she studied with a friend’s mother who was a tailor and taught her to cut patterns. When she got married when she was 25 years old she left home and started her own tailoring business. On average, she estimates that she will make around 35 pieces of clothes each week and employs two staff to help her sew. I love working with Lan Anh because she has amazing attention to detail – all her pieces are beautifully crafted and that is why we have chosen to work with her on the Peekaboo Dress and the chemise – the simple classic pieces where the small details really count. 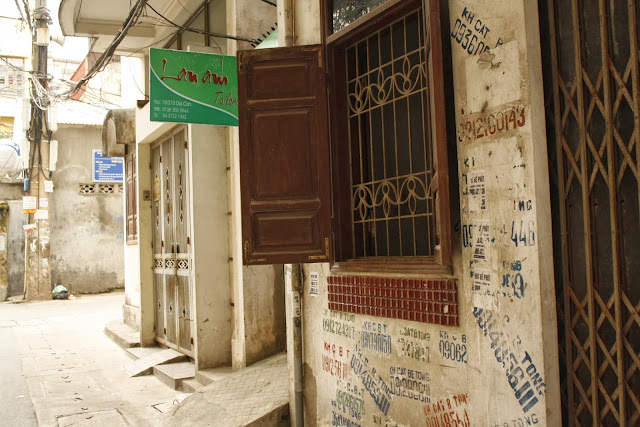 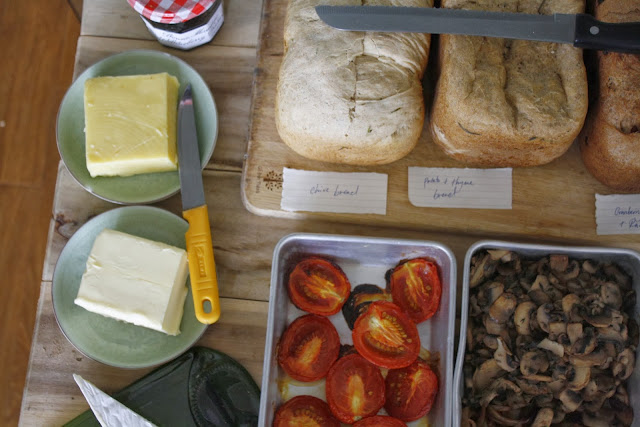 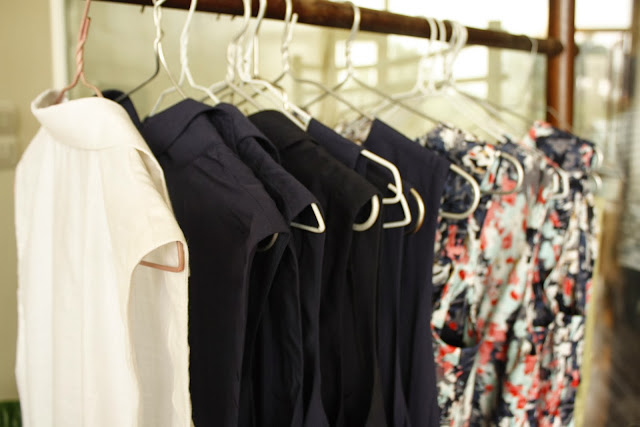 After getting each piece tailored in a range of sizes, I invited a bunch of girls over and threw a ladies brunch + clothes fitting party! I had also recently gotten a new breadmaker, so it was also a chance to practice my breadmaking skills. We tested out each size on a number of girls of different heights and curves to test the sizing and cuts and make adjustments before going forward on producing bulk orders in each size. I also tested a few finishing options to see which buttons, zips and linings people preferred. The navy chemise, for example, originally came with three options for buttons - a classic white pearl button, a small marble button and a funky square yellow button. In the end almost everyone unanimously voted for the white pearl button! 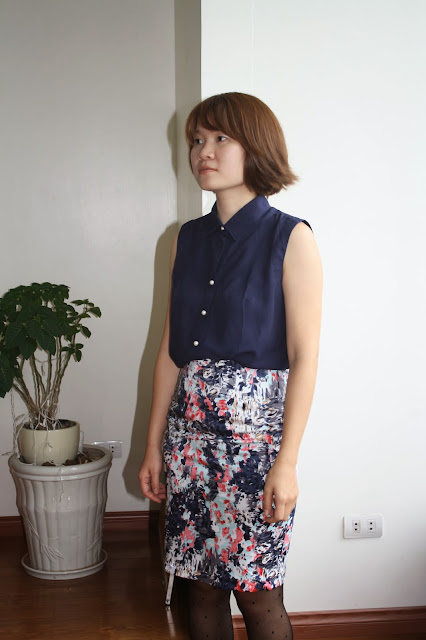 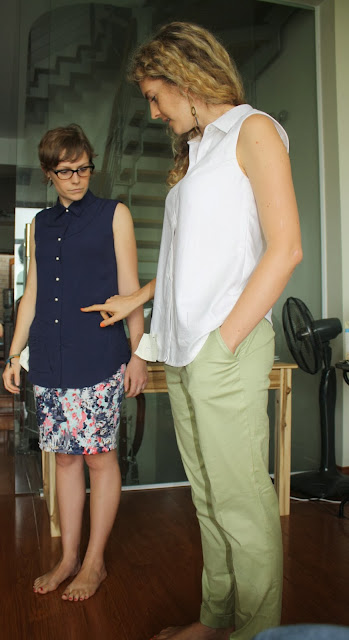 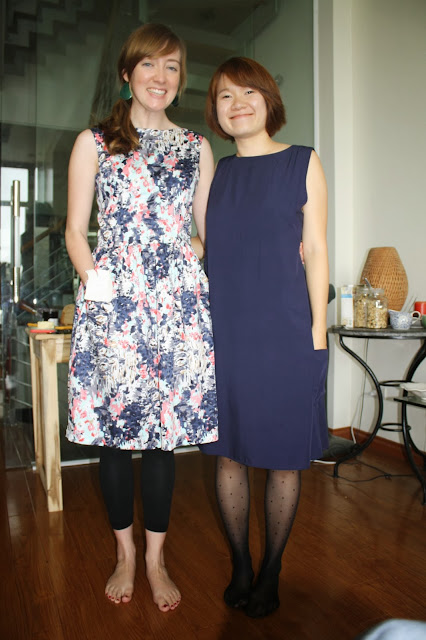 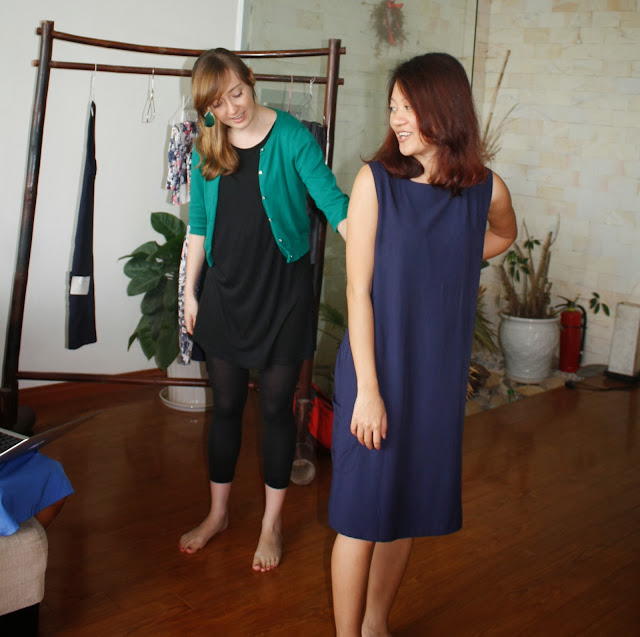 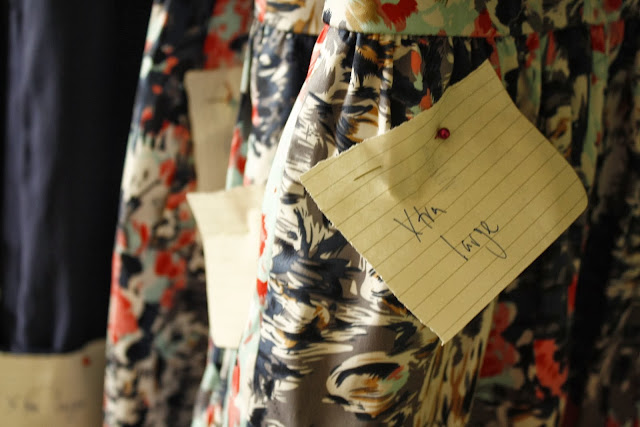 After doing preliminary design with Martha in Ghana, the next step was starting production in Senegal with our tailor, Diogomaye. On a Saturday afternoon I was invited over to Diogo’s family’s house in Parcelles – the Northern suburbs of Dakar, right next to the beach – super beautiful!

The first step was going over the first designs with Diogo, and seeing how these could be translated to the fabric we had purchased at Sandaga earlier in the week with Diogo’s cousin and Aunty. After reworking a few of the measurements, Diogo got to work in his atelier to produce the first lot of samples we would use to finalise the pieces we’d make for Madame Tay’s first production lot.

After Diogo had completed 15 samples, I gathered a few of my friends to have a casual clothes fitting to see how the pieces worked and if we needed to do any adjustments. The clothes fitting turned into an impromptu photoshoot, here are a few shots: 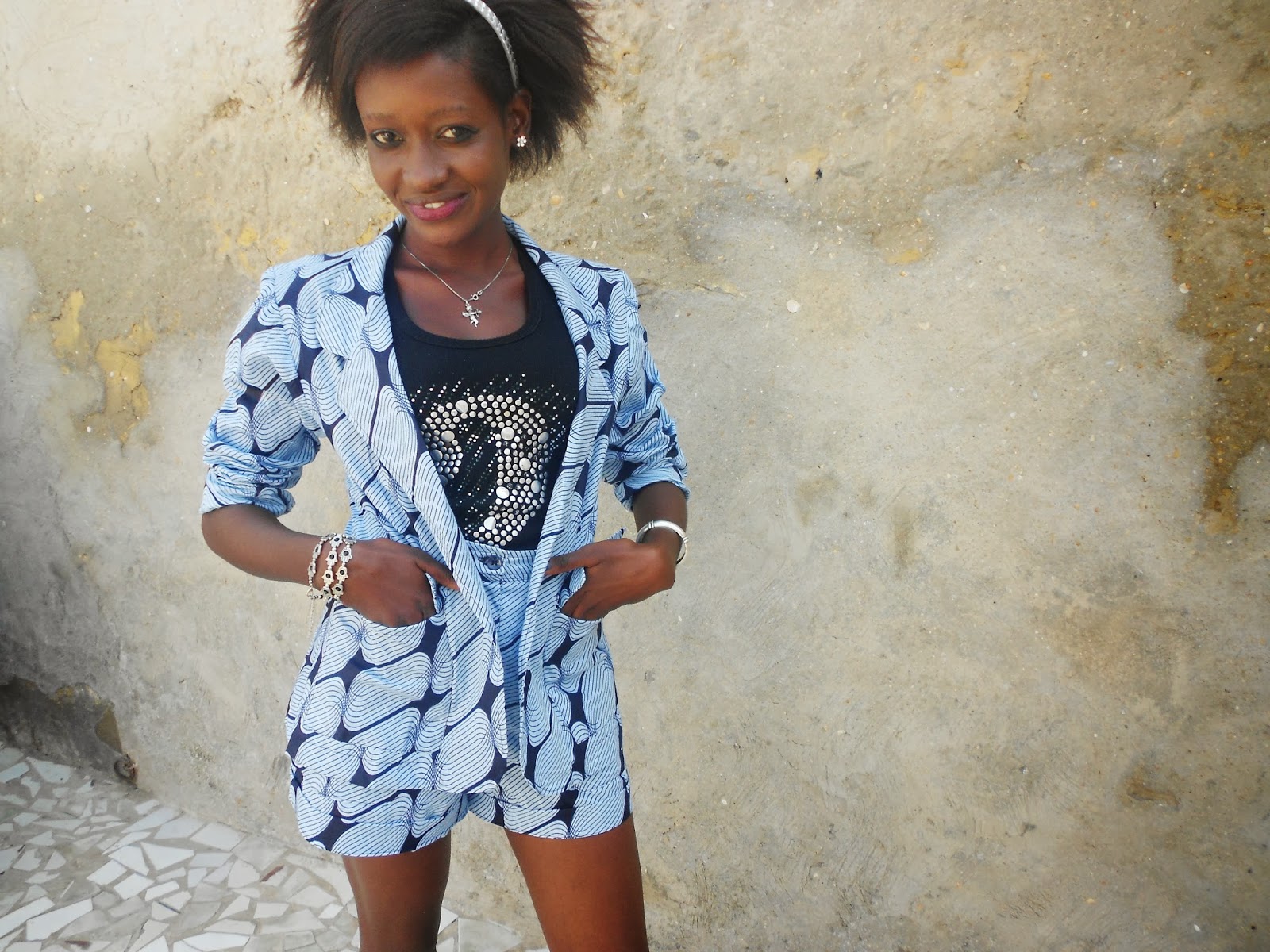 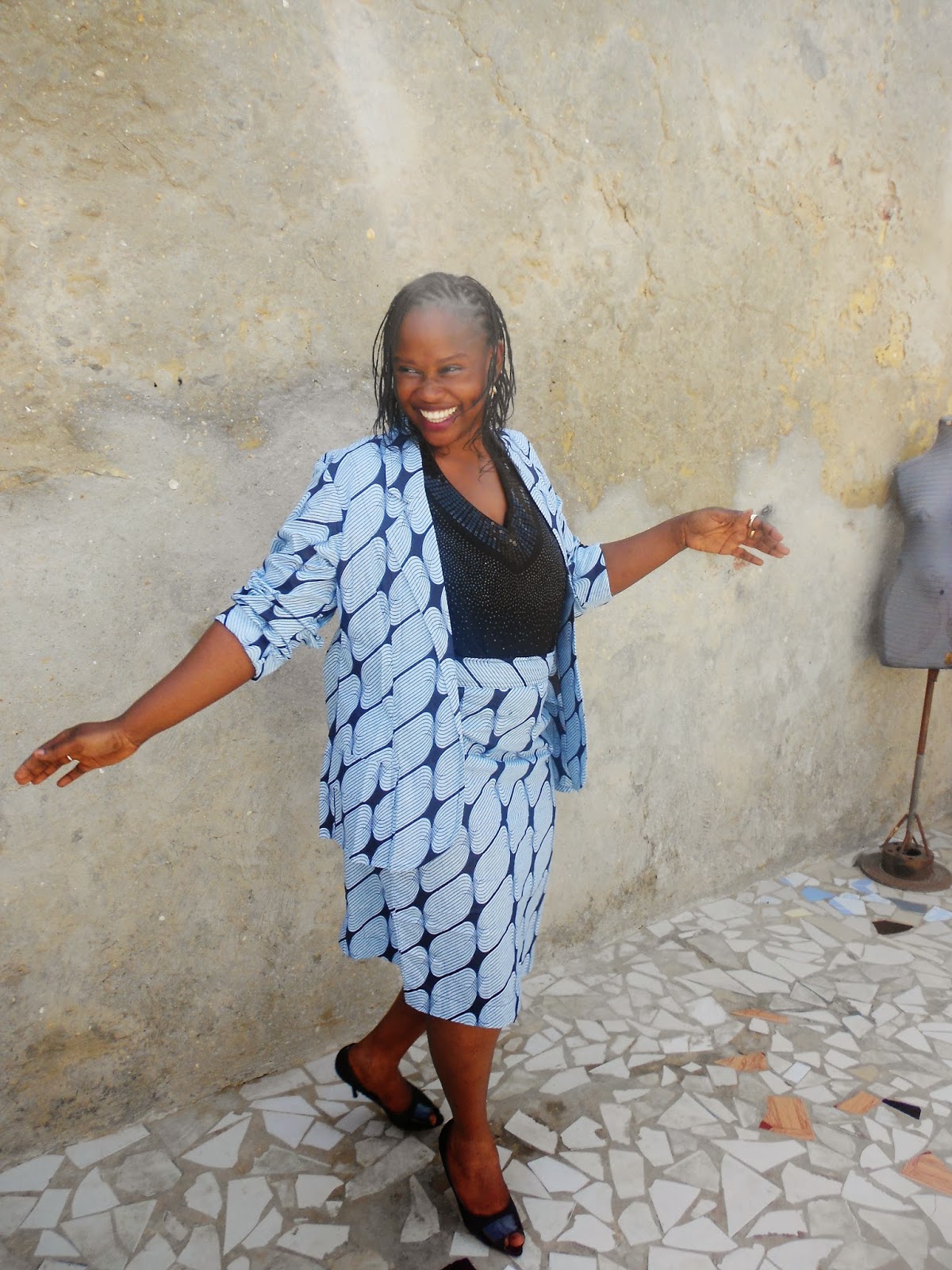 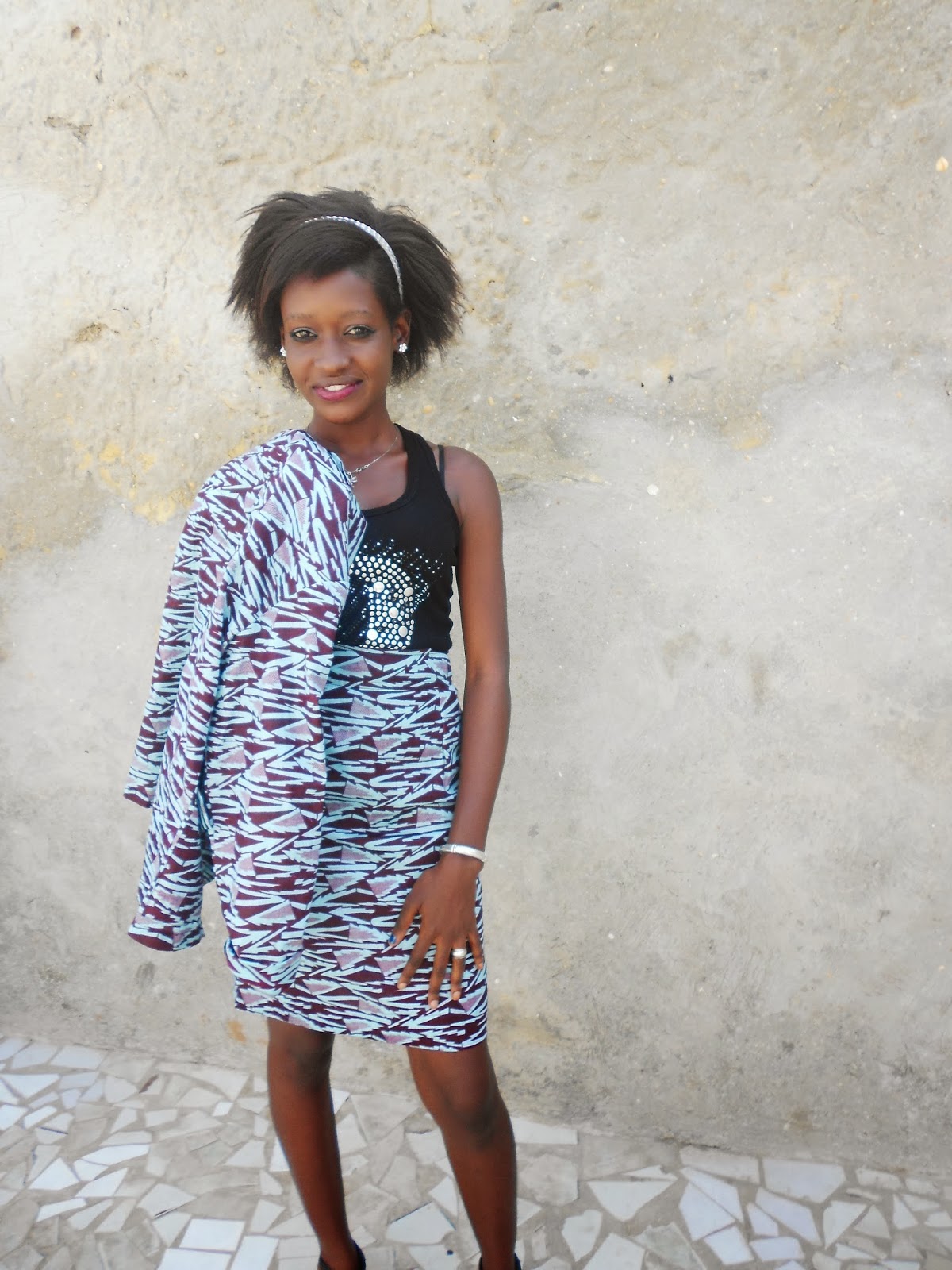 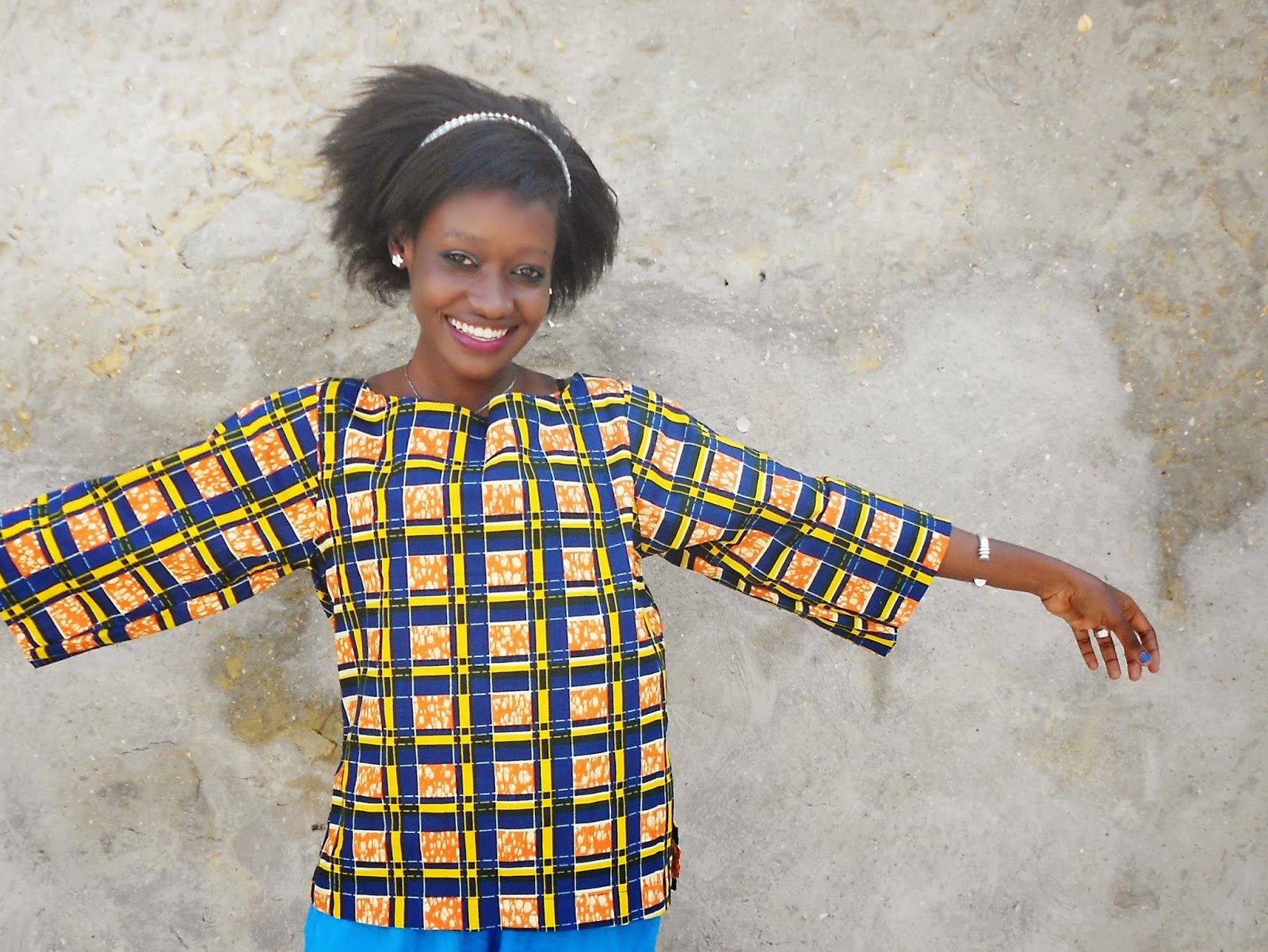 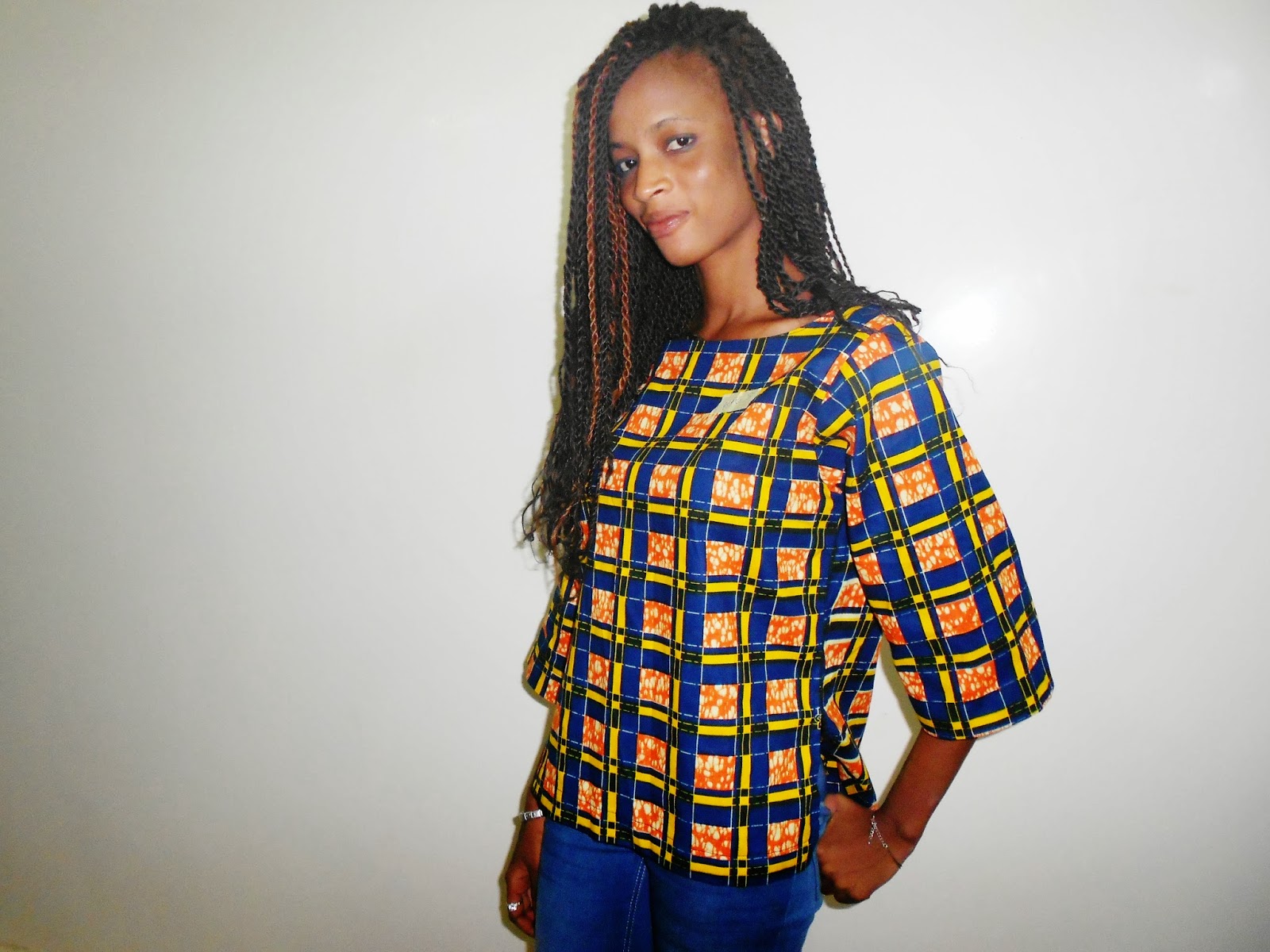 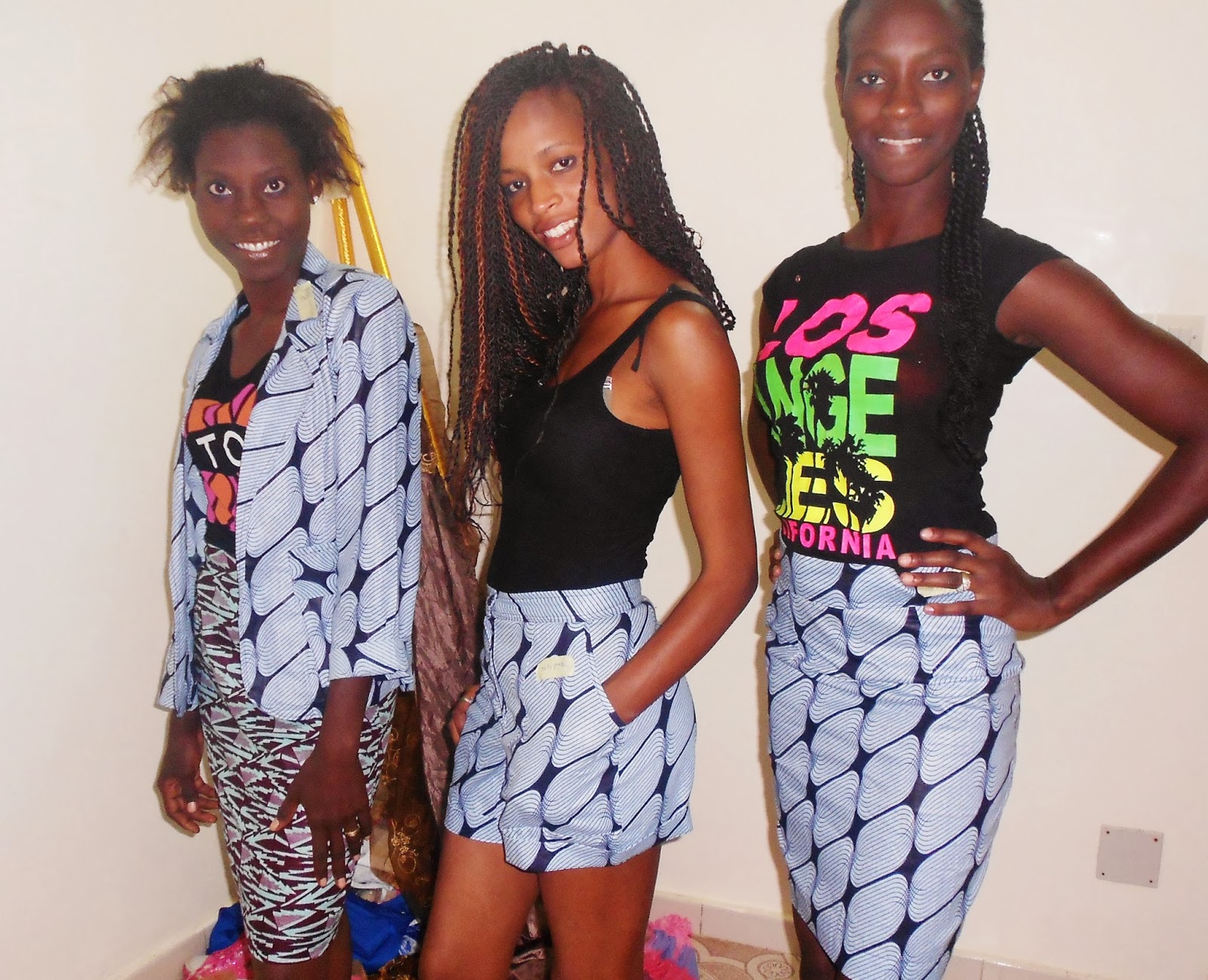 It was really useful to see what the pieces looked like on a range of different sized women, and made me realise just how difficult correct sizing and fit could be. My friends were really helpful, and made plenty of suggestions to Diogo and me as to what should be changed. After taking lots of notes, and working out what pieces needed some work, Diogo and I set to making a few more samples, just to make sure we were on the right track.
Posted by Cara Mo at 11:42 No comments:

ALL ABOUT COTTON PART II: Exploring sustainable and ethical options 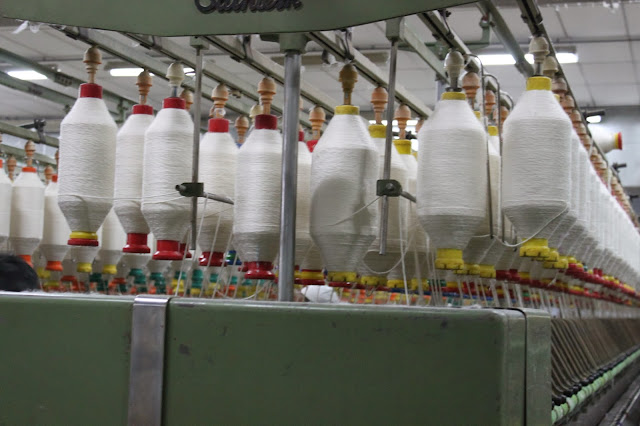 We’ve already talked a bit about the environmental and social challenges associated to cotton production and also the long and complicated production process from cultivation to cloth. What initiatives are currently being undertaken to produce cotton in a more ethical or sustainable way?

Fairtrade and organic fabrics are probably the most well-known options for the end consumer.

However, there is often cross over between these two as obviously companies who have an interest in social issues also generally have a concern for environmental issues and vice versa.

This print is most commonly known as coquillage, meaning ‘shell’ in French. Other names for it include ‘Bunch of Bananas’ and ‘Snail Shell’. It is a heritage design, dating from the 1960s – fifty years on and it is still as popular as ever. Wandering around the streets of Accra or Lome you’re guaranteed to spot at least one person wearing the familiar print.

In Togo, the print is known as 'Abobo to le gome' meaning 'the snail is out of its shell'. This name comes from the town of Abobo, located in the coastal region of Togo where they celebrate a snail festival each year in September called Abobozan. During the festival, the big molluscs are devoured by the locals -- apparently they are quite the speciality!

We spotted a beautiful navy blue, deep red and cream take of this classic print at Marche HLM in Dakar, Senegal that we snapped up for Madame Tay's first collection. Here's a sneak peek: 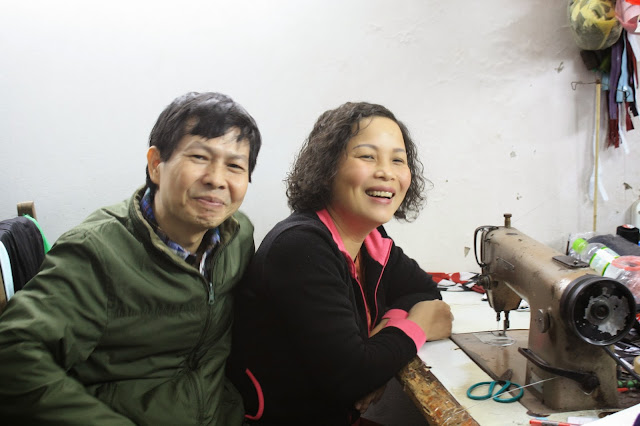 Like most of Binh’s customers, I first came to know about him through a recommendation. Having run his own tailoring business for more than 20 years, Binh never advertises his services, so his customers learn about him purely through word of mouth.

Now 54 years old, Binh came from a family of tailors and has been working since he was 16. His parents taught Binh and his three sisters and brother to sew from a young age and they would help their parents in their small tailoring business. Today, all of his three sisters own their own tailoring businesses in Hanoi – one of them living and working in the house directly opposite Binh’s. His only brother has moved to Saigon and works in business, but Binh has stayed in the family trade - he notes that he likes to keep with traditions.

Although Binh’s parents worked as tailors out of same family home and shop where Binh still lives and works today, the backdrop was vastly different. His parents worked through Japanese and French occupation of Hanoi and the American-Vietnam War.  Back then, employing staff was restricted by law, so Binh’s parents worked on their own filling out a small number of orders each week. After his parents retired, Binh started his own tailoring business.

He first met Thuy in 1990 when she came as a customer to his shop to get some clothes tailored. Although Thuy worked in a clothing factory, she did not know how to make clothes herself as she worked only on her small part of the production line. After they married, Thuy quit her job at the clothing factory, Binh taught her the basics to sewing and tailoring and today she helps to sew zips and buttons and manages the finances.

When he first started his own business, Binh worked by himself – as he explains, his expenses were low back then and he only needed to work enough to earn a small amount of money for food and other basic living costs. After getting married, he suddenly found he needed to spend a lot more money! As luck would have it, Doi Moi had taken place only a few years before and in 1994 the United States would lift  their almost 20 year trade embargo on Vietnam, opening up the country’s economy to international business and trade. Opportunities were ripe for small business owners like Binh and Thuy. At their peak, they employed 7 staff to support him and Thuy. However, the economic downturn that hit Vietnam in 2011 has also affected their business. Today, they have three staff who have been working with them for 20 years. Binh estimates that each day, they make together on average 10 pairs of pants and 5 dresses.

When I ask Binh what he imagines himself to be doing if he hadn’t been a tailor, he pauses for a while and then shakes his hands perplexed, tailoring he explains is his hobby. He points to the checked shirt and trousers he is wearing and his daughter My’s denim jeans, noting that they were all tailored by him.

You can find Binh and Thuy just around the corner from the Temple of Literature. 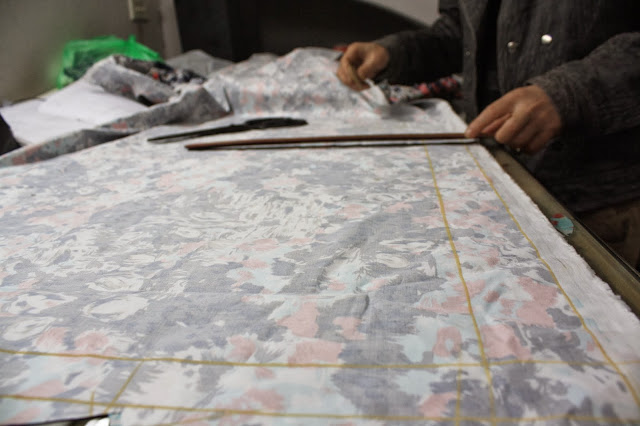 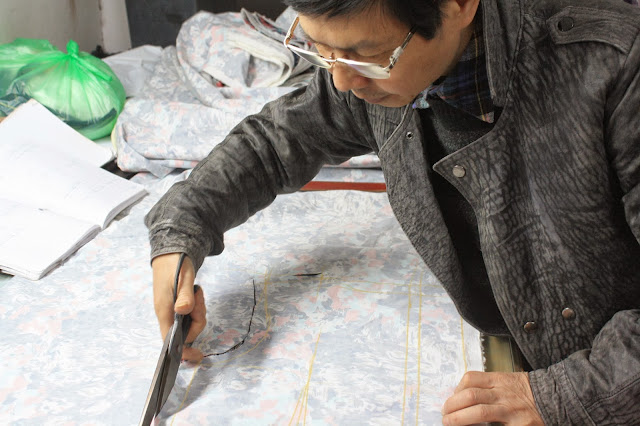 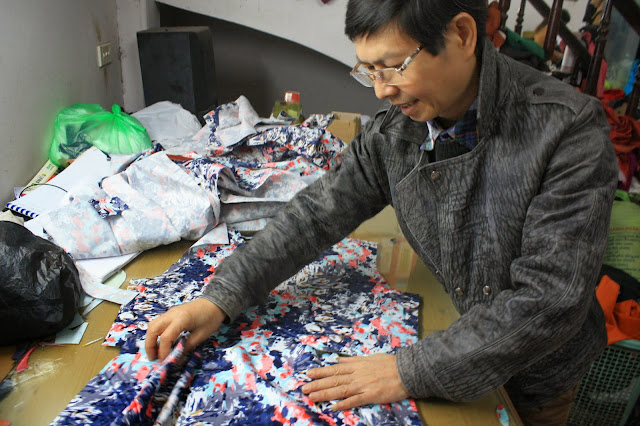 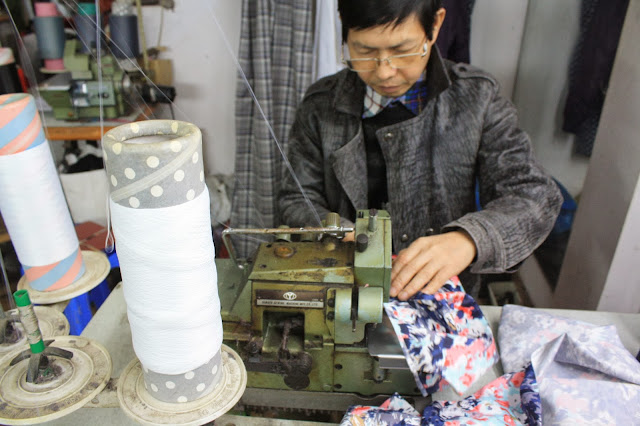 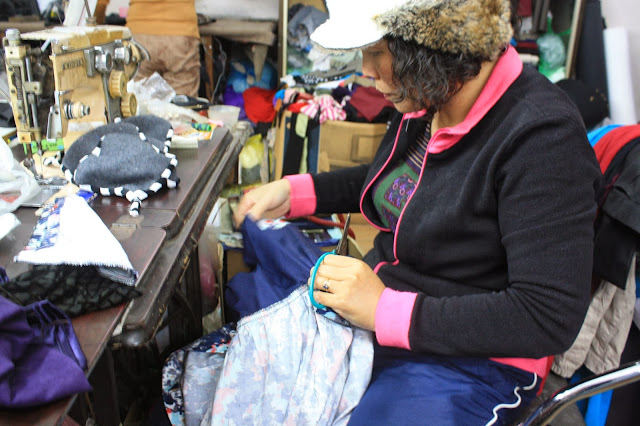 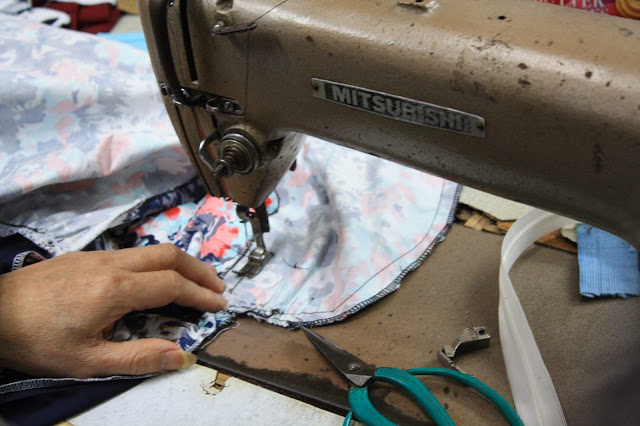 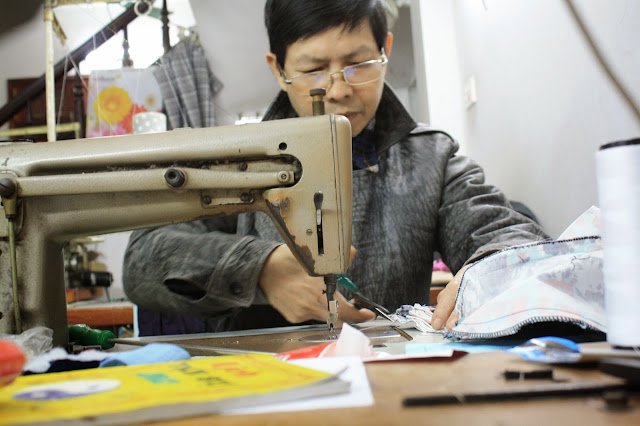 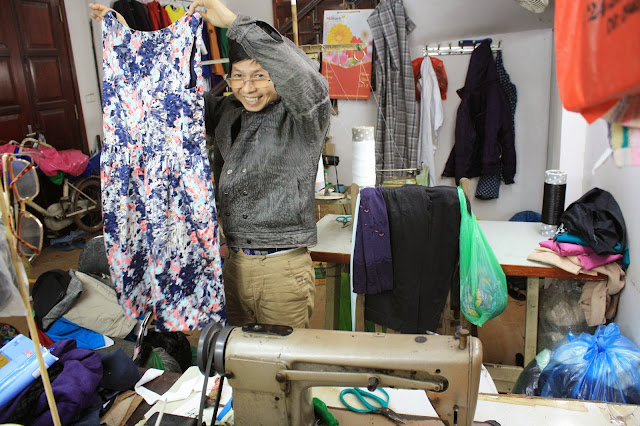 When we first decided to start the Madame Tây project we were pretty excited, but also pretty nervous. How were we, four passionate but far from professional fashion aficionados going to design and produce our own range of clothes? Luckily, we have had a bunch of talented and creative friends backing us through the entire process. In West Africa, this includes a team of people spanning the whole region!

Our design processed started in Tamale – the capital of the Northern Region of Ghana. I had been living here for a year prior to moving to Senegal, and in that time had developed a special friendship with Martha, the ‘best tailor in all of Ghana’ (according to Martha’s brother Henry, that is).


Martha was very supportive of the idea behind Madame Tây, and played a crucial role in the initial design stages. Together, we planned, drew and designed the pieces to be produced in Senegal. Without her keen eye for contemporary fashion, and her intimate knowledge of the intricacies of garment production and working with wax print, it would have been impossible to produce our made-in-West-Africa pieces.

This was a super interesting process, as a lot of the ideas we initially had wouldn't work for a range of reasons. Working strictly with wax print can be limiting -- it is quite stiff and the detailed motifs means that it takes a pretty skilled eye to cut into the fabric properly to ensure the final design is correct. I learnt a whole lot about the production process of tailor-made clothes from Martha, and we are very grateful for all her support!

From Dakar to Saint-Louis

After buying as much wax print as I could carry in Dakar, I made the journey up to Saint-Louis, once the former capital of French West Africa and the home of Diogomaye Lo, Madame Tay’s principal Senegal-based tailor.

It’s a long road up to Saint-Louis, and the easiest way to make the five hour journey is in a sept-place – old Peugeots with seven seats. So early one November morning I headed to the gare routiere, the bus station, called Pompiers to catch a sept-place up to Saint-Louis. The Pompiers station is always bustling, even early in the morning. Hundreds of people travelling all over Senegal converge on the one spot, plus even more people selling everything from balloons to mandarins, phone credit and coffee.  The journey to Saint-Louis is pretty smooth, with the Senegalese government constantly working to improve transport infrastructure in certain parts of the country, but is pretty long and arduous, not to mention dusty!


NB: Last three photos supplied with permission from Aleyna who blogs at http://unetoubabadakar.com/ - a great read (in French) for anyone interest in life in Senegal as a 'toubab' (which means 'foreigner' in the local language Wolof)
Posted by Cara Mo at 11:21 No comments:

Email ThisBlogThis!Share to TwitterShare to FacebookShare to Pinterest
Labels: Senegal

One of my favourite Hanoian designers is Moniq by M. I love how all her clothing uses beautiful fabrics which feel so soft against your skin and her elegant box-like cuts.


MONIQ BY M's "22" Collection from Giang Nguyen Hoang on Vimeo.

Needless to say, I was very excited to hear that Moniq by M was going to have a fashion show to launch her winter range. 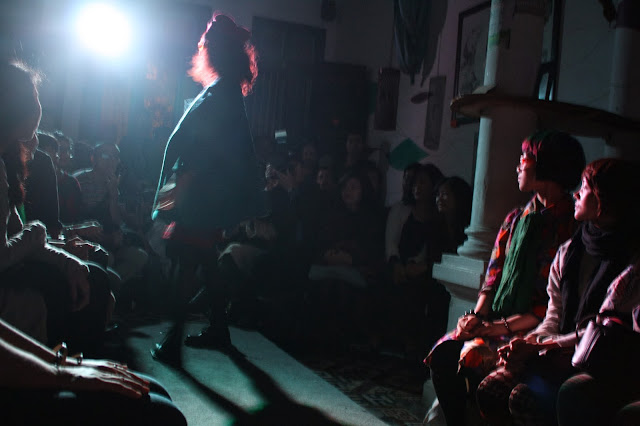 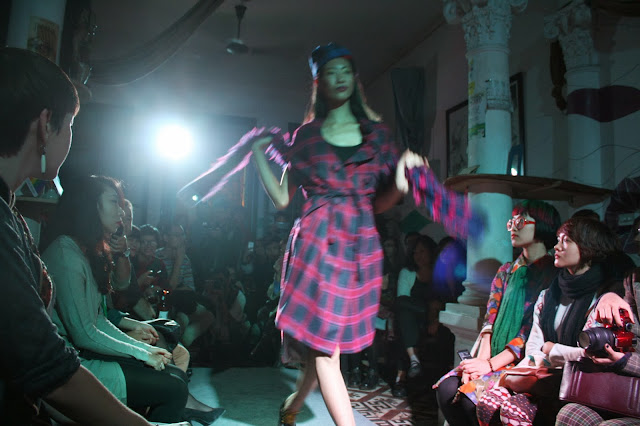 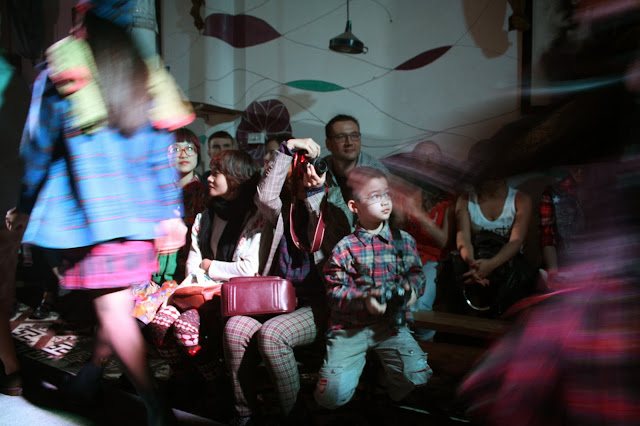 I particularly love this kid in the front-row who has been tasked with photography duties. 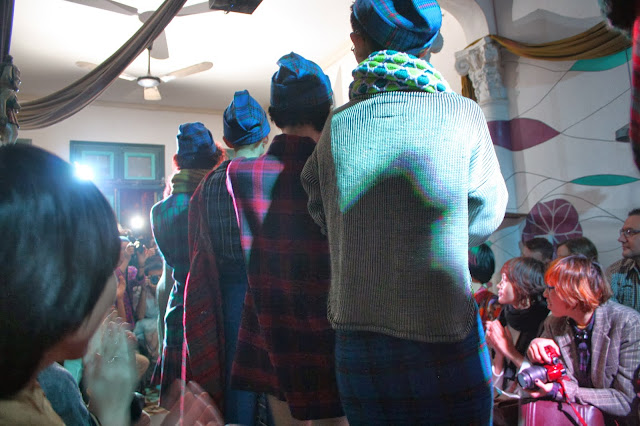