Beginning this project in Ghana, where African-produced wax print is ubiquitous, I thought sourcing locally made textiles would be as simple when I arrived in Senegal. Once I started visiting markets and speaking with textile importers, I quickly realised it would be much more difficult to find textiles for Madame Tây that had been produced in Senegal, if not impossible.

As we were developing this project, we realised we had the unique opportunity to be able to explain how our garments were produced. For us, ethical production starts with the materials used to create a garment, but as Steph remarks in her earlier posts about the cotton industry (All About Cotton - Part I and Part II), the production processes involved in creating the fabric we purchased are completely closed off to us.

Working in West Africa, where most young people prefer buying mass-manufactured clothes imported from China, or second hand clothes imported from all over the world,  this was particularly poignant for me as I hoped that Madame Tây would not only be able to support Senegalese artisans, but also the local textile industry. When I realised that there was no local textile industry in Senegal (You can read more about  the wax print used to create Madame Tây garments here), I started looking further abroad.

What I learnt about textile production in the West African region is not surprising. Due to the competetive nature of the global market, it is not financially viable to commercially produce textiles in the region (with only a few foreign-owned companies producing exclusive wax print in Cote d'Ivoire and Ghana). The exception to this rule is of course traditional fabrics which have been produced in the region for centuries. In West Africa, due in part to the nomadic nature of many ethnic groups in the region, such fabrics are everywhere - pagne tissé (thick woven cloth from the Manjak people of Southern Senegal/Guinea-Bissau) bogolan (mud cloth from Mali), bazin riche (dyed and beaten cotton from Mali) and thioup (tie-dyed bazin riche cotton from Mali) can be found at most markets and are often only worn for special occasions - naming ceremonies, religious celebrations, funerals and weddings. 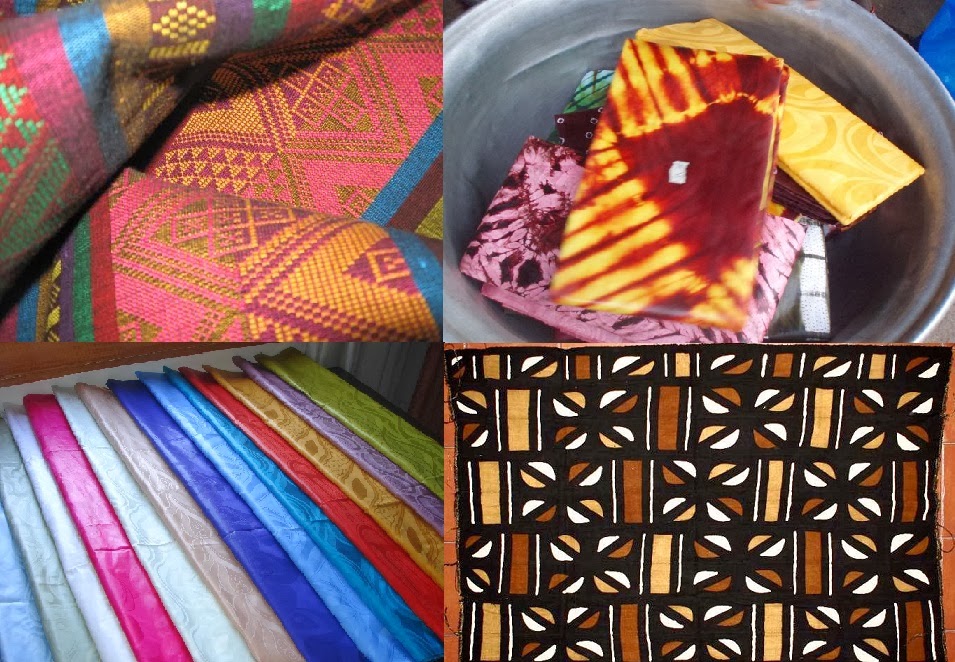 One of the most accessible locally-produced fabrics in Senegal is Indigo-dyed cotton which is hand-dyed by the Fulani people - a nomadic tribe that is spread throughout the Sahel (Fulani people can be found right across the continent, with the biggest populations found in Nigeria, Guinea, Senegal, Mali, Niger and Cameroon).


The Fulani people (also known as Fulbe, Peul or Pulaar) are tradtionally nomadic cattle herders. Although there are many sedentary communities of Fulani across West Africa, you still find nomadic groups today who rely on trade to survive (When I was living in Northern Ghana, the only way to get fresh dairy products was to visit the Fulani women at the market who would have huge calabashs full of fresh cow's milk, and who made delicious cow's milk cheese!).


Like cattle, indigo also plays an important role for the Fulani - not only is it used to stain the lips and face, the cloth they dye with indigo is an important symbol of Fulani culture and tradition, and is often worn during celebrations.

Indigo is not rare - it has been used by centuries by people all over the world (inclding being widely used in parts of South East Asia -- Steph will be writing about Indigo in Vietnam soon, stay tuned!) The plant Fulani indigo dye is produced from is Indigofera, a plant native to the tropics. In Senegal, most of the Indigo cloth you find is brought to Dakar by Fulani traders from Guinea, where the Fulani consistute the majority ethnic group. The cloth is mostly hand-woven cotton, often locally grown and produced. Before dying, the women (it is generally women who dye the cloth, and men who harvest and weave the cotton) will tightly sew thread patterns in the fabric which when removed after dying reveal the delicate light-blue or white designs in the cloth.

When I was sourcing fabric at Marché HLM in Dakar, Senegal, I met Yaye - an ambulant seller from the Gambia, who had travelled to Dakar to sell Indigo cloth he'd bought from a Fulani woman in the South of Senegal. I was immediately drawn to the striking colour and softness of the cloth, so bought four yards.


When I showed the fabric to our tailor Diogomaye, he was excited to be working with a textile he was so familiar with - often Senegalese (Fulani Senegalese or otherwise) will use indigo cloth to make extravagant long kaftans and boubous. I had some ideas for a few pieces to be made with indigo I'd purchased, that would play on the fabric's softness and beautiful pattern. When the samples were completed, Diogo and I realised our ideas would be harder to achieve than we thought -- the indigo cloth tends to fray when cut into (most boubous and other outfits use whole pieces of indigo, without cutting the cloth), and when the fabric is hemmed it doesn't sit flat, even with bias binding Diogo was unable to hem the cloth properly.

As a result, Madame Tây's first production lot doesn't contain any garments made from this indigo cloth (There are a few beautiful purses, though!). It is definitely a work in progress, and we'd like to think that we'll be able to create some beautiful garments from this stunning cloth in the near future.